Toledo Blade does featured article on the event.

Home/Uncategorized/Toledo Blade does featured article on the event.
Previous

Toledo Blade does featured article on the event.

C’mon, in: Acoustics for Autism has cold beer, a warm tent and a warmer heart

First things first: The beer’s cold and the tent’s warm.

What else is left to be said about the Maumee-based, musical blockbuster of compassion and love known as Acoustics for Autism?

Well, for one, it’s free. But you probably already knew that.

In honoring the longstanding wishes of co-founder Nicole Khoury, a rocker by night and a Toledo Municipal Court judge by day, there are no cover charges. Absolutely none. This is an event some promoters would have no qualms about charging top dollar for tickets. She does. 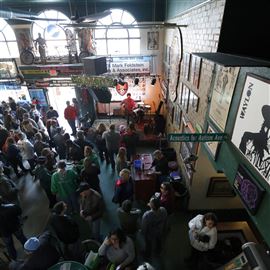 Phillip L. Kaplan
The 52: Great music or great pizza? At the Village Idiot, it’s both

“There will never be a cover charge,” event spokesman Scott Hayes, Khoury’s husband and drummer in her band, Arctic Clam, said.

Khoury and fellow musician Dave Carpenter founded Acoustics for Autism in 2008 with the idea of it being a one-time show at the Village Idiot, featuring 17 bands.

It has blossomed into one of the region’s most beloved annual events, with 80 acts spread across seven stages this year.

Most will do sets lasting 30 to 45 minutes. Think of it as a music fest version of speed dating, a smorgasbord of sounds you can sample for intel on which acts you want to hunt down later for deeper relationships.

That’s just one of the ancillary benefits, though. The main purpose, of course, is to raise money for families dealing with autism.

Now in its 13th year, Acoustics for Autism has set a lofty goal of generating $100,000 in proceeds from this year’s festival, which begins at noon Sunday and lasts until bars close early Monday morning.

To do that without charging admission requires a lot of food, beer, raffle tickets, souvenirs, CDs, knickknacks, and other items to be sold. This year’s silent auction features a football signed by the Three Mannings — father Archie and sons Peyton and Eli, all former NFL quarterbacks. The youngest, Eli, retired in late January. Though it’s been a mild winter so far, Hayes wants everyone to know — jussssst in case anyone’s tempted to wimp out because of the weather — that the main tent set up in the municipal parking lot behind the Village Idiot and Buster Brown’s will be nice and toasty, as it has been at past events. That means you can park in the lot or along a side street, leave your coat in your car, and slip inside the tent or one of the host establishments before the goosebumps appear.

“You’re only going to be cold from the parking lot to the tents,” he said.

What: Acoustics for Autism

When: Noon Sunday to 2 a.m. Monday

Here’s another little factoid: You know how a lot of well-meaning fund-raisers fall short of expectations because operating expenses are so high?

Acoustics for Autism, according to Hayes, has caught on so well with Maumee businesses that they have been picking up most of those in recent years. That means more of what you donate actually makes it to the intended recipients.

Acoustics for Autism now has given out thousands of dollars in scholarships and helped families with autistic children pay for anything from clothing to music therapy and horseback riding therapy, he said.

“Everything we make after we pay for the event goes right into a scholarship fund for families of kids on the autism spectrum,” Hayes said. “We’re just interested in getting treatment for the people that works for them.”

Melissa Toth, lead singer of the rock group Not Fast Enuff, is one of many local musicians fiercely loyal and more than eager to donate their time and talent to the festival.

How fierce is that loyalty? Toth will be in her 37th week of her pregnancy if she appears onstage at this year’s show, which she intends to do. There are no known records about such things, but it would appear that might be one for the books.

“Acoustics for Autism is one of my favorite days of the year,” Toth said. “I love how a community comes together for a worthy cause. When you walk into any part of Acoustics for Autism, the positive energy takes over and you can only feel happiness and love.”

Jazz singer Ramona Collins, who is appearing in a duet with fellow jazz warbler Kim Buehler, said she is doing the event “because it’s for a great and important cause and another opportunity to use my talent as a singing entertainer to give back to my community.” 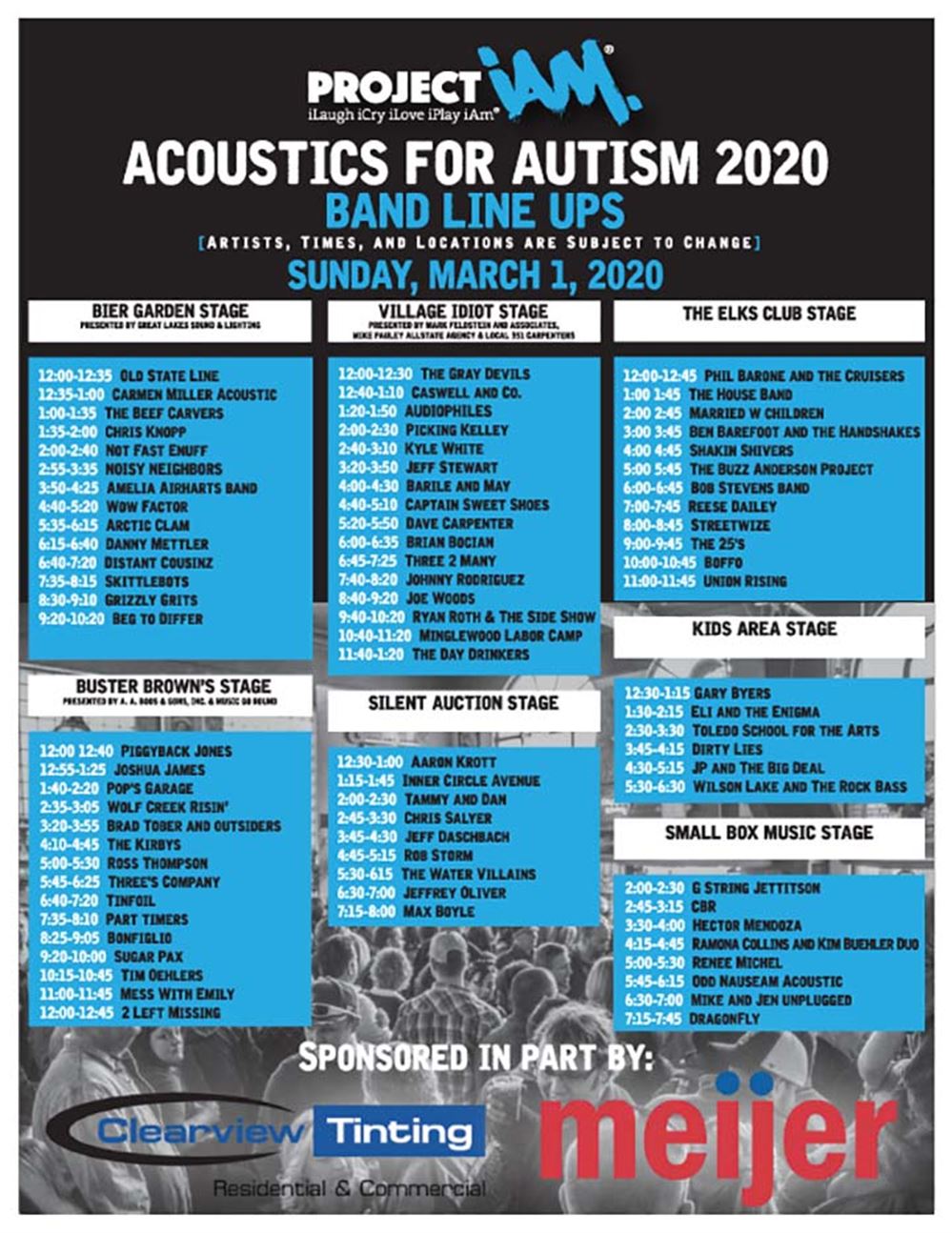 Buehler said she admires Collins for the many fund-raisers she performs around greater Toledo, calling her “a true volunteer through and through.”

“The power of people coming together for a common cause is a magical thing,” Buehler added. “I feel like we are the lucky ones to be asked to join the cause.”

Buehler said she’s singing this year for a 10-year-old girl she knows who is autistic and non-verbal. She said the child has “the greatest sense of humor.”

“She can say a million things with a sideways glance and a raised eyebrow,” Buehler said.

Singer Cari Langenderfer of the female-driven Amelia Airharts rock band said it’s “a beautiful thing to see so many people support such an incredible cause” and said she has been honored to have been part of it.

“Nicole Khoury and Dave Carpenter have built something really special for our community. They have put their heart and soul into it and it truly shows,” she said.

Singer-guitarist Kyle White, who’s been with Acoustics for Autism since its inception, loves that money raised from the event stays in the community.

“It has been amazing watching this event grow over the years, and I’m proud to be a part of it,” she said.

Lucas County Commissioner Gary Byers has been strumming guitar and singing in the children’s area for several years. He said he gets a kick out of their candor because “if they don’t like something, they tell you.”

“It’s an opportunity for kindness,” Mr. Byers said of the event.

Hayes said local musicians have “unmistakable” affection for Acoustics for Autism, not just because it’s for a good cause but also because it’s one of the few times they get to catch up with fellow musicians and see other bands.

“On that first Sunday in March, that’s where you want to be as a musician,” he said.

The 13th annual Acoustics for Autism begins at noon on March 1 in downtown Maumee. It lasts 14 hours and features 80 bands. There is no cover charge.

About the Author: Project iAM